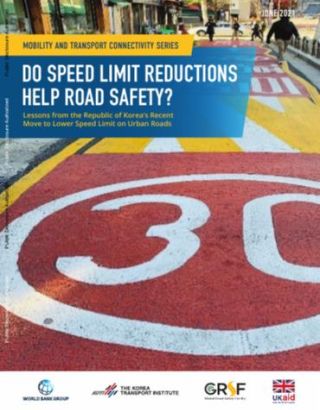 Significant research has been undertaken on how changes in speed limit—for example, the introduction of 30 kilometers per hour, or kph (20 miles per hour, or mph) speed limits—impact safety both when combined with, and without "traffic-calming" engineering treatments such as speed humps or raised platforms. However, most of the studies have been conducted in Australia or countries in Western Europe, with almost no recorded studies from Asia, Africa, the Americas, and Eastern Europe. Though it may be reasonable, a well-developed infrastructural environment such as that found in Korea would expect similar results as that of the western countries, a study originating in Asia could have a strong demonstration effect and prove very convincing for many Asian countries.

With this in mind, the main aim of this study is to present the findings from Korea’s reduced speed limits on safety performance and to support the establishment of suitable speed-management strategies based on a quantitative data-driven approach. The scope of the project was as follows:

To start, this report first provides a brief literature review on the concept of Safe System speed limits, and the effect of speed limit reductions as part of speed management in several countries, followed by a brief description of the evaluation methods for the before-after assessment. This is followed by a summary of the findings, a set of recommendations, limitations of this study, and finally, a capsule of future research that could be undertaken to either extend or follow up on the study.