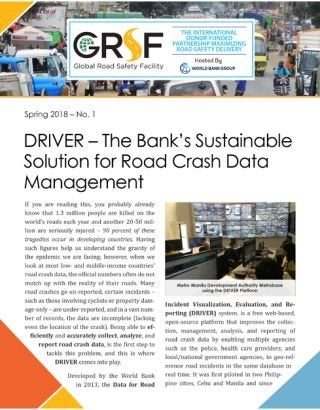 If you are reading this, you probably already know that 1.3 million people are killed on the world’s roads each year and another 20-50 million are seriously injured – 90 percent of these tragedies occur in developing countries. Having such figures help us understand the gravity of the epidemic we are facing; however, when we look at most low- and middle-income countries’ road crash data, the official numbers often do not match up with the reality of their roads.

Many road crashes go un-reported, certain incidents – such as those involving cyclists or property damage-only – are under-reported, and in a vast number of records, the data are incomplete (lacking even the location of the crash). Being able to efficiently and accurately collect, analyze, and report road crash data, is the first step to tackle this problem, and this is where DRIVER comes into play.

Developed by the World Bank in 2013, the Data for Road Incident Visualization, Evaluation, and Reporting (DRIVER) system, is a free web-based, open-source platform that improves the collection, management, analysis, and reporting of road crash data by enabling multiple agencies such as the police, health care providers, and local/national government agencies, to geo-reference road incidents in the same database in real time. It was first piloted in two Philippine cities, Cebu and Manila and since then, the GRSF has supported the improvement and deployment of DRIVER through workshops, pilot projects, implementation support and scaleup in countries such as Brazil, Bangladesh, India, Kazakhstan, Laos, Thailand, Vietnam, and Saudi Arabia.