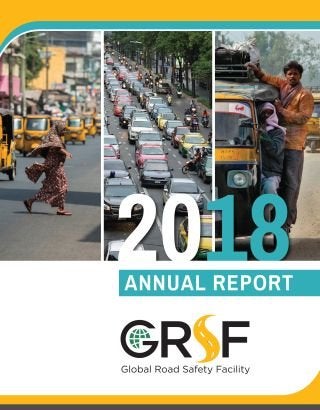 The Global Road Safety Facility (GRSF) is a donor-funded global partnership program hosted by the World Bank, with a mission to help address the crisis of road traffic deaths and injuries in low and middle-income countries (LMICs). GRSF provides funding, research, knowledge, capacity building, communications, advocacy and technical assistance designed to scale-up the efforts of LMICs to build their commitment, scientific, technological and managerial capacities to deliver road safety.

Since its inception, the GRSF has undertaken in-house projects and operated as a hybrid grant-making global program, allowing it to distribute funding externally for global, regional and country activities, and internally through World Bank-executed grants, which enhance the work of the World Bank’s transport global practice and leverage road safety investments in transport operations in client countries.

GRSF also works in close effective partnerships with other key road safety organizations, especially the World Bank itself, through the Bloomberg Philanthropies road safety program, the MDB road safety community, and our partners in the development of the Road Safety Observatory for Africa including the ITF, the FIA, and SSATP. Through these processes over the last several years, GRSF has established itself as one of the highly influential leaders of the global road safety agenda.

GRSF is committed to addressing road safety as effectively as possible, to maximize the safety gains from each donated dollar. We operate in diverse environments across many cultures and continents, and we work with a diverse range of partners. Our own diversity is also an important strength, with diversity know to bring better decision making. We are improving our gender balance, and the GRSF team come from a wide range of nationalities (the United States, Somalia, Romania, Poland, Japan, Jamaica, India, Colombia, and Australia).

We are indebted to our donors and funders including Bloomberg Philanthropies, DFID, CITA, Government of Japan, and the World Bank. We are also excited and enthused by the commitment of another new donor coming in the next financial year: the UK Department for Health and Social Care, adding to the re-commitment for another three years from DFID and doubling the UK Aid support over the next three years.

GRSF has also benefited greatly from input and guidance from World Bank staff. I would like to thank especially Maria Marcela Silva (Practice Manager) and Jose Luis Irigoyen (Senior Director) for their guidance. Finally, huge thanks are due to Liz Jones for a wonderful and focused job of chairing the GRSF Board over the last three years, and to Kelly Larson for taking on this important role for the Facility.