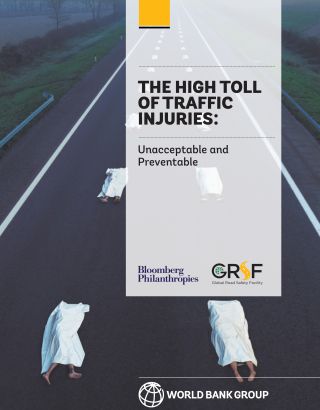 Each year, 1.25 million people lose their lives on the world’s roads and another 20 to 50 million are seriously injured. The tragic loss from a road traffic death or serious injury is compounded by the harm to households and social networks. A disproportionate 90% of road traffic injuries (RTIs) occur in low- and middle-income countries (LMICs), representing a major public health and economic burden. This is an eminently preventable problem that is critical to the development agenda. Unfortunately, due to lack of solid data, the impact of road injuries on economic growth and social welfare has been difficult to assess.

A new World Bank report funded by Bloomberg Philanthropies, The High Toll of Traffic Injuries: Unacceptable and Preventable, looks to fill the gap. It proposes a comprehensive methodology to quantify both the income growth and social welfare benefits that safer roads could bring to developing countries. The analysis is based on data collected from 135 countries over 24 years, and focuses on China, India, the Philippines, Tanzania, and Thailand—five geographically, demographically and economically diverse LMICs.

The study shows that reducing the number of RTIs in developing countries not only increases income growth, but also generates substantial welfare benefits to societies.

Key findings from the report include: