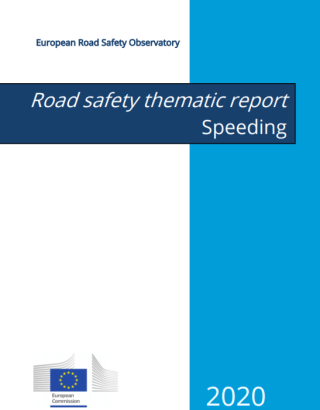 Driving at excessive or inappropriate speed is a major threat to safety on the road. It is estimated that 10 to 15% of all crashes and 30% of all fatal crashes are the direct result of speeding or inappropriate speed. The faster someone is driving, the higher the risk of a crash, but also the higher the severity of the crash and the probability that the crash is fatal. Another important factor influencing the crash risk are differences in vehicle speed. The less the speeds of vehicles differ from each other, the lower the risk of a crash.

The main factors affecting the impact of speed-related crashes are: the design of the road, the safety systems in vehicles, differences in mass between the colliding vehicles/ road users, and the vulnerability of the road users. The probability that a vulnerable road user (pedestrian, cyclist, motorcyclist) will die in a collision with a passenger car or truck is much higher than that for the occupants of a vehicle. This is one of the main arguments in favour of the introduction of low speed zones in densely populated areas.

Speed limits are frequently exceeded by many car drivers. 67% of Europeans admit to having speeded on rural roads over the previous 30 days. There are five main reasons why people drive too fast:

Speeding is socially more accepted than other traffic code violations such as drunk driving.