Back to Publications
GRSF-funded Report

Road Traffic Injuries in Malawi: With Special Focus on the Role of Alcohol 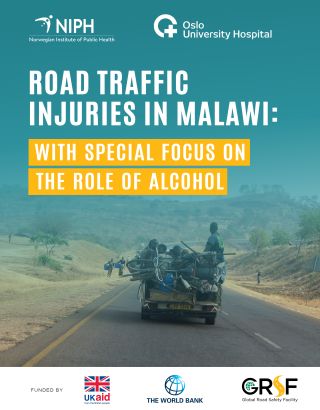 Road traffic crashes are one of the most important causes for physical and psychosocial disease burden and early death worldwide. The United Nations (UN) declared the Decade of Action for Road Safety during the period 2011-2020, with the objective to halve the number of road traffic deaths by 2020. While the number of fatal road traffic crashes has decreased since then in high-income countries (HIC), it has increased in low- and middle-income countries (LMIC). Worldwide, about 90% of the crashes are recorded in LMIC (2016), while these countries had only about 60% of the motor vehicles.

The study is a collaborative effort among the Kamuzu Central Hospital (KCH), the Norwegian Institute of Public Health (NIPH) and the Oslo University Hospital (OUH), with the financial support of UK Aid through the Global Road Safety Facility (GRSF), the International Council on Alcohol Drugs and Traffic Safety (ICADTS) and the Norwegian Council for Road Safety (Trygg Trafikk).

The objective of the study was to generate new knowledge about road traffic injuries in Malawi and the extent of traffic accidents related to alcohol use, to increase capacity to conduct alcohol-testing, and develop a database for the findings, which in turn will form the basis for future policymaking to reduce traffic accidents.

The objectives were achieved through collecting data on patients who sought treatment after road traffic crashes and admitted to the Emergency Department at Kamuzu Central Hospital in Lilongwe, Malawi. The data included basic information about the patients, alcohol use before the injury, and information about accident circumstances, including types of road users and vehicles involved. Knowledge and training of local KCH employees to perform alcohol testing and record data were an important aspect of this study.

This research project was made possible with the financial support of UK Aid through the Global Road Safety Facility, the International Council on Alcohol Drugs and Traffic Safety and the Norwegian Council for Road Safety.

Road Traffic Injuries in Malawi: With Special Focus on the Role of Alcohol