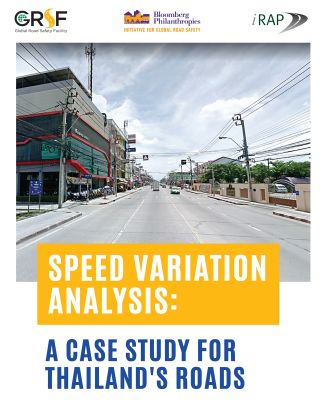 Research shows that vehicle speed affects the severity of all road crashes. Higher speed crashes involve more kinetic energy: the more energy that is dispersed in a crash, the more severe that crash will be. Speed also affects the likelihood of a crash occurring in the first place. The likelihood of a serious or fatal crash increases significantly even with small increases in vehicle speed. Field studies demonstrate that a one percent increase in mean average speeds results in a roughly two percent increase in the frequency of crashes involving injury, a three percent increase in severe crashes, and a four percent increase in deaths. The safety of infrastructure is heavily influenced by traffic speed, to the extent that without a detailed understanding of speed limits and vehicle operating speeds, it is difficult to assess the safety performance of infrastructure at a given location.

This report seeks to highlight the central role of speed management in the Safe System approach and how a simple speed variation can improve safety for all types of road user. At the core of this report lies the experience derived from iRAP assessments undertaken under the Bloomberg Philanthropies Initiative for Global Road Safety (BIGRS) on 867 km of national roads in Thailand and 258 km of streets in Bangkok, between 2015 and 2019. This also involved capacity building activities with local partner, Chulalongkorn University, which led to almost 700 specialists being trained on road safety engineering during this period.

The importance of speed in influencing road user risk is highlighted in two case studies on different road types in Thailand — the Outer Ring Road and Hathai Rat Road in Bangkok — to demonstrate the effects of different speeds on the iRAP Star Ratings. These ratings objectively quantify the likelihood of a crash, and its severity, whereby a person's risk of injury is highest on a 1-star road, and lowest on a 5-star road. Among a series of simulations and results, this report shows that enforcing a 10 kph speed limit reduction could prevent one in three fatal and serious injuries (FSIs) on both those roads.