Back to Publications
GRSF-funded Report 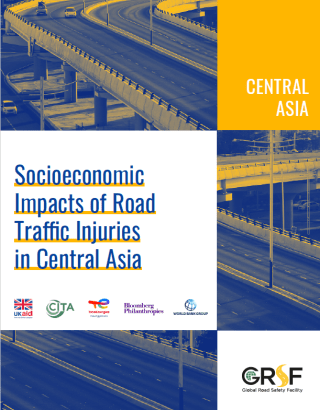 Road traffic injuries (RTIs) are well known to cause enormous human suffering in terms of both morbidity and mortality, and on a global scale. The economic dimension of the disease burden is far less well understood; but it is important to assess the size of the economic burden so that it can be considered when calculating the cost-benefit ratio of policies to tackle this problem. Because it is, in principle, and to some degree, an avoidable one.

This report focuses primarily on assessing various dimensions of the economic consequences of RTIs, as applied specifically to four Central Asian countries (Kazakhstan, Kyrgyzstan, Tajikistan, and Uzbekistan) – a part of the world in which there is still a major need to reduce RTIs.

This study shows that on top of the harm RTIs inflict upon human health, they also impose a considerable financial burden on health care systems. In 2016, the total estimated health costs of RTIs in these four countries was approximately Int$95 million, ranging from Int$2.8million in Tajikistan to Int$49.3 million in Kazakhstan. In Kazakhstan, the overall health costs resulting from RTIs were similar to the cumulative expenditure for rehabilitative and palliative care within the state-guaranteed basic package. The heavy financial burden on health care systems to manage RTIs in these countries adds weight to the urgency to increase preventive efforts by road safety policymakers, and should motivate appropriate organization of the post-crash response by health care system decision makers. The cost estimates discussed in this report indicate the potential for significant economic cost savings if both deaths and injuries from road crashes could be substantially reduced in these countries.