Speeding Hurts Us All – and the Impact is Life-changing 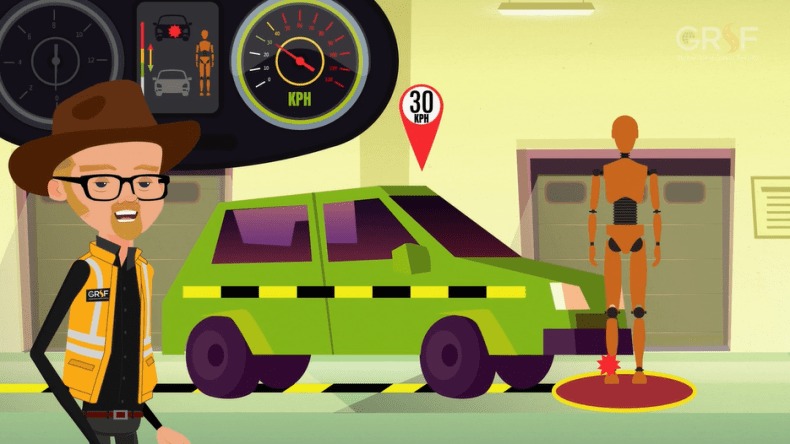 Speed is one of the main risk factors associated to road traffic crashes and it is often cited as being the leading contributor to fatal and severe injuries on the world’s roads. This is mainly because:

The collective impact of speed as a contributor to crash risk on society is huge, and its likelihood to produce severe injuries and permanent disabilities has important repercussions on the individual(s) involved, their families and the community. Therefore, it is crucial to implement safe speeds through an effective speed management, following the Safe System approach, thus considering human fragility and its nature to commit errors.

First thing we need to accept in order to be able to implement the Safe System approach as part of our road safety and safe mobility work, whether it is in our communities, our cities or countries, is that us all, human beings, are vulnerable in nature and hard wired to make mistakes. And while many of these flaws are “innocent”, in some cases even well intended, and most of them are unintentional, when human fragility and human errors are not considered in advance, it can lead to everlasting tragedies!

The science behind the Safe System approach (Davis, G.A., 2001) tells us that when we consider the human vulnerability, our fragility towards for example kinetic forces, along with our natural tendency to make errors; and prepare accordingly the system, as the road network and the intersections in our city for example and the vehicles we use, to accommodate these intrinsic characteristics, untended outcomes, such as injuries (fatal and non-fatal) can be avoided.

A crucial and lifesaving element of the Safe System approach is the Speed Management.

In that understanding of the Safe System approach, speed limits are crucial. Especially when considering that evidence has proven that if a driver goes at a speed limit of 40km/h, for example, the chances of causing serious injuries are around 25% less than when over speeding by “just 10km/h” (50km/h). And if the speed limit was set at the Safe System speed of 30km/h, the chances of suffering serious outcomes drop to 30%; almost 63% less than when hit at 50km/h.

In other words, the human tolerance to injury would be exceeded if hit by a car that is travelling at more than 30km/h, as shown in the below graph (according to data from the Abbreviated Injury Scale, AIS), a pedestrian hit at less than 30km/h has a 20% chance of suffering severe injuries and thus a high probability of surviving (80%), in contrast that same pedestrian has a risk of about 80% of being kill at a collision speed of 50km/h, so that increase of 20km/h would mean increasing your chances of killing that pedestrian by 65%.

But let's be sincere with ourselves, how many of us drive around the city or a populated area at 30km/h because we don’t want to take that risk? Most of us might low our speed to 30km/h due to fear, but fear of getting a ticket, because speed limit is being enforce, because we know there is a speed camera around, and if we exceed that speed, we have the risk of getting a ticket delivered to our house, or because we see a police car around and we fear the police might stop us.

However, if you think about it again, why are we so afraid of a ticket or being stopped by the police, when that has a “simple” solution, like paying a fine or an administrative punishment, like some demerits points from our driver license or our chance to do some community work 😊; but are we not afraid of killing somebody? are we not afraid of changing that person and his/her family life forever? are we not afraid of carrying that feeling of guilt on our shoulders? So, think about it, are you really not afraid of the chance of killing somebody? Think about it again, the probabilities are quite high when driving over 30km/h specially in populated areas where there is high presence of pedestrians and cyclists, places close to hospitals, or schools, where you are putting kids in danger. Do you really want to take that risk?

Speed management involves a multisectoral coordinated effort to address inappropriate speeds from the design of the road and the limits established along the entire road network. To help us decide on a proper safe speed. But Speed management needs to be done properly for it to be successful and effective, and it is a shared responsibility (yes, it includes you too!).

Under the new BIGRS Program 2020-2025, GRSF is the host of the Speed Management Hub.

So, we invite you to take a good look at all these resources and be part of the solution, and not the risk! Visit and learn more at the GRSF's Speed Management Hub.